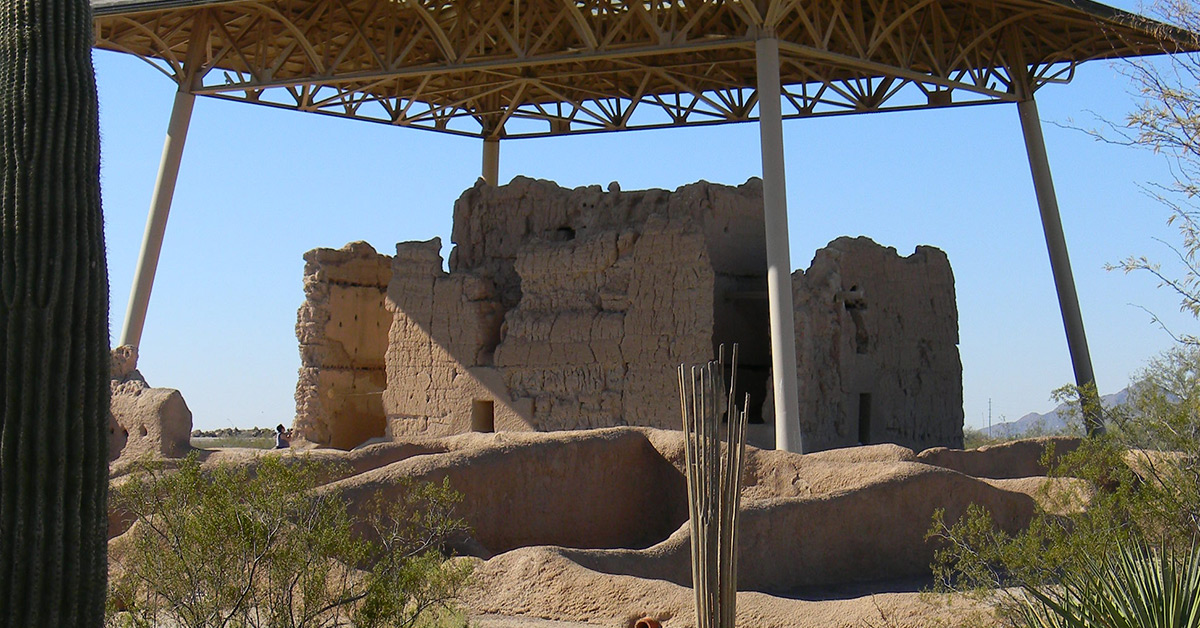 The Casa Grande Ruins National Monument is one of Arizona’s lasting treasures.  Built around 1400 CE by Native Americans who inhabited the area, this Casa Grande or “Big House” stands as a symbol of how these people lived, worked and played.  Not much is known about the purpose of this building, as experts have varying ideas. Some theorize it was a meeting place due to an intricate chamber of rooms lining the structure.  Others say it had a more meaningful significance.  Many agree that the multi-floor structure is an amazing timepiece that still stands as it did hundreds of years ago.

In 1892, President Benjamin Harrison set aside one square-mile of Arizona Territory surrounding the Casa Grande Ruins as the first prehistoric and cultural reserve established in the United States. A few years later, President Woodrow Wilson proclaimed Casa Grande Ruins to be a National Monument on August 3, 1918. The management of the Ruins was transferred to the National Park Service during this time. Today, the Indians of the Gila River Community, O’Odham, Hopi, Zuni and others celebrate this great achievement by holding various events. The Native American Music Fest is one of the largest, celebrating the rich history of native music through the ages.

City Speak: GET UP AND MOVE CASA GRANDE…

Update from Pinal County about West Nile Virus.First West Nile Virus (WNV) positive mosquitoes detected in Pinal County this Monsoon Season.This week, during routine seasonal mosquito surveillance, the Pinal County Public Health Services District (PCPHSD) detected West Nile Virus (WNV) positive mosquitoes in the county. It is especially important for everyone to be vigilant in preventing mosquito breeding and mosquito bites now that we have had some significant monsoon rains. Click to read more: ow.ly/vNOP50KiiF3Help Prevent West Nile Virus:• If you have a swimming pool, keep it operational. If you must keep it out of use, make sure you remove the standing water, keep it chlorinated, or run the filter daily.• Eliminate standing water where mosquitoes can lay their eggs. Check for items outside the home that collect water, such as cans, bottles, jars, buckets, old tires, drums and other containers and get rid of them. Change water in flower vases, bird baths, planters, troughs, and animal watering pans at least twice a week.• Repair leaky pipes and outside faucets, and move air conditioner drain hoses frequently to prevent standing water.• Even a short time being outdoors can be long enough to get a mosquito bite. Take extra care to use insect repellent and protective clothing. When outdoors, use an EPA-registered and CDC approved insect repellent.• Keep mosquitoes outside by having well-fitting screens on both windows and doors. ... See MoreSee Less